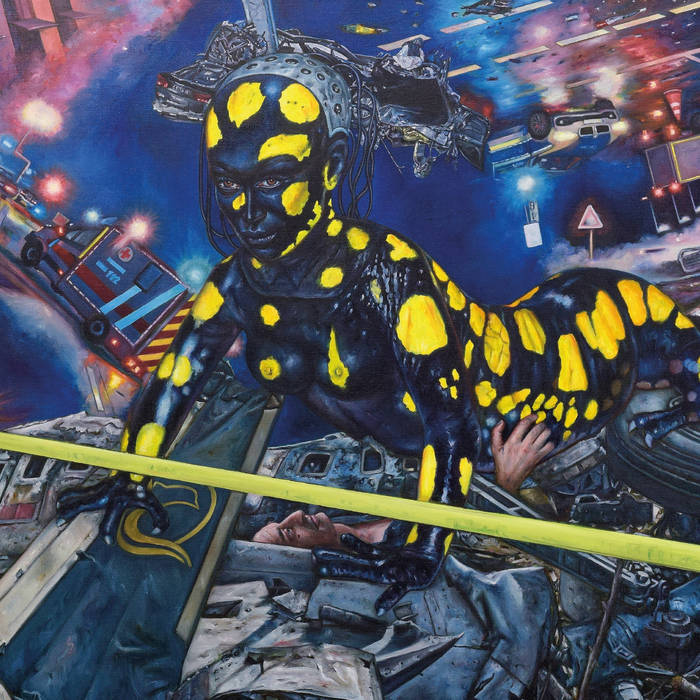 Desiderii Marginis, Troum, Martin Bladh & Karolina Urbaniak and Anemone Tube have gathered to pay homage to the first four novels of British writer J.G. Ballard: The Wind From Nowhere, The Drowned World, The Drought and The Crystal World, which are often seen as disaster novels. Each of the four projects presents a very unique take on the chosen work, using the respective text as a starting point to offer sonic representations of and (further) perspectives on these books, using drones, field recordings, words and much more to create evocative and richly layered soundscapes.

Adorned by a painting of German artist Alex Tennigkeit depicting a sphinx-like hybrid creature, a phoenix rising from the ashes of our civilization, the double album also includes an in-depth essay by Michael Göttert (African Paper) on Ballard's works in which he argues that the novels can best be understood as texts of transformation, as well as texts by the sound artists.

The double album starts with Desiderii Marginis' track “The Wind From Nowhere”, on which field recordings and intense drones suck the listener into a stormy vortex. Troum interpret The Drowned World, and their two dynamic tracks illustrate both the changes happening to the (outer) landscape and the (inner) world of the protagonists. Martin Bladh & Karolina Urbaniak make use of sound and words on “The Poisoned Well”, their interpretation of The Drought, referring to Shakespeare, the Bible and scorched earth policy amongst other points of reference. The album closes with Anemone Tube's take on The Crystal World, using field recordings made in Japan’s Mount Fuji forest. “Sea Of Trees” aims to show a devolutionary process, in which man gains access to his actual spiritual home – a primordial wisdom, which lets him discover an internal non-dual space, allowing to ultimately becoming one with the earth as body-being consciousness – the ‘perfect dream’ landscape.

DESIDERII MARGINIS – THE WIND FROM NOWHERE
Music composed and performed by J. LEVIN.
Recorded in Solitude studio, Linköping during August 2019.
All rights reserved.

TROUM – OUTSIDE (ARCHAIC LANDSCAPE) | IN-SIGHT (ARCHAIC MIND-SCAPE)
Everything mixed and recorded by TROUM in 2019, using sounds of animals, air and insects from unknown regions as basis for both tracks.